The Parker solar probe is no stranger to the sun. On January 17, the NASA spacecraft will make its seventh step near our star, less than 14 million miles from its scorching surface.

And this time, Parker will have a lot of company. A lucky celestial formation means that dozens of other observatories will be trained in the sun at the same time. Together, these telescopes will provide unprecedented sun views, helping solve some of our star’s most enduring mysteries.

The head of the spacecraft that will join the clock party is the newcomer Solar Orbiter, which the European Space Agency launched in February 2020 (SN: 2/9/20). As Parker walks our star this month, Solar Orbiter will be watching from the other side of the sun.

"This is partly luck," solar physicist Timothy Horbury of Imperial College London said Dec. 10 at a briefing at the American Geophysical Union's virtual meeting. “No one planned for Parker Solar Probe and Solar Orbiter to work together; it just came out that way. "

Working together, sungazers will address long-standing puzzles: how the sun creates and controls the solar wind, why solar activity changes over time, and how to predict powerful solar flares.

“I think it’s really going to be a revolution,” Horbury said. "We're all incredibly lucky to do it right now."

The Parker Solar Probe was launched in 2018 and has already had six close encounters with the sun (SN: 5/5/18). During its nearly seven-year mission, the probe will eventually oscillate less than 6 million kilometers from the sun, less than a seventh of Mercury's distance from the sun, giving Parker's heavily armored instruments a better taste of plasma and charged particles. the outer atmosphere of the sun, the crown (SN: 31/07/18).

Because Parker gets so close, its cameras cannot take direct photos of the solar surface. However, Solar Orbiter will not approach 42 million kilometers, which will allow it to take higher-resolution images of the sun. The official scientific phase of the mission will not begin until November 2021, but the spacecraft has already captured images revealing small “bonfire” flares that may help heat the crown (SN: 16/07/20).

During Parker's seventh meeting, to be held Jan. 12-23, Solar Orbiter will observe the sun from a vantage point almost opposite Parker's view. Half a dozen other observers will also be on the lookout, such as ESA's BepiColombo spacecraft heading for Mercury and NASA's veteran solar observer STEREO-A. Both will flank Parker on either side of the sun. And Earth telescopes will be observing from a vantage point about 135 million miles behind Parker, making a straight line from Earth to the spacecraft to the sun. 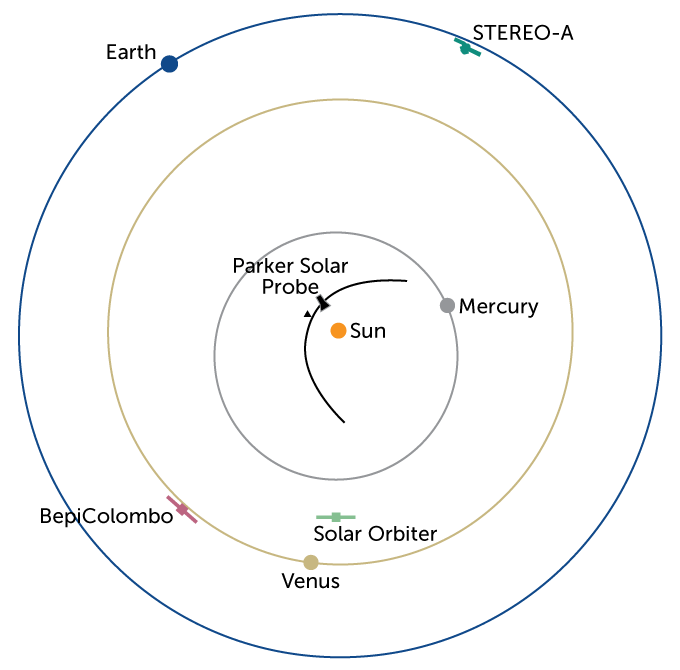 When the Parker solar probe makes its way past the sun (shown in the black arc in the center of this diagram), they will also be on the lookout for other spacecraft and Earth telescopes. This diagram shows the relative positions during the flyby of the Sun, Earth, Parker, Solar Orbiter, and two other spacecraft, BepiColombo and STEREO-A.JHU-APL 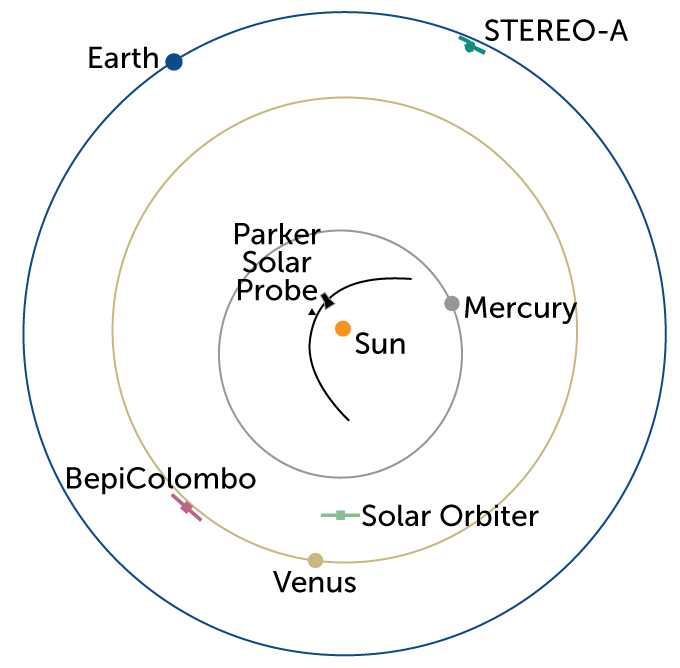 When the Parker solar probe makes its way past the sun (shown in the black arc in the center of this diagram), they will also be on the lookout for other spacecraft and Earth telescopes. This diagram shows the relative positions during the flyby of the Sun, Earth, Parker, Solar Orbiter, and two other spacecraft, BepiColombo and STEREO-A.JHU-APL

The situation is similar to Parker’s fourth flyby in January 2020, when nearly 50 observatories saw the sun along with the probe, Raouafi says. These observations led to a special issue of Astronomy and Astrophysics with over 40 articles. One of the results was to confirm that there is a region around the dust-free sun, which was predicted in 1929. “It was amazing,” Raouafi says. "We want to do a campaign that is as good or even better for this race."

At the AGU meeting, the researchers presented new results from the second year of Parker's observations. The results delve into the mystery of the magnetic twists called “setbacks” that Parker observed in the solar wind, a constant stream of charged particles flowing away from the sun (SN: 12/4/19), says Raouafi.

Some observations support the idea that twists originate at the base of the crown and pass through Parker and beyond, like a wave traveling along a rope. Others suggest that the changes are created by turbulence within the solar wind itself.

Finding out which idea is correct could help you pinpoint how the sun produces the solar wind in the first place. “These (setbacks) could be the key to explaining how the solar wind heats up and accelerates,” Raouafi said in a recorded talk for AGU.

Meanwhile, enlarged Solar Orbiter images plus simultaneous measurements of the solar wind can allow scientists to track wind energy particles to their birthplaces on the surface of the sun. The flares of the bonfires – the "nanoflars" detected by Solar Orbiter – may even explain the setbacks, Horbury says.

“The goal is to connect small transient events like nanoflares with changes in the solar wind,” Horbury said in the briefing.

Waking up to the sun

Parker and Solar Orbiter couldn’t have come at a better time. “The sun has been very calm, at a deep solar minimum for the past few years,” Horbury said. "But the sun is starting to wake up now."

Both spacecraft have seen solar activity build up over the past year. During your sleep period, the sun presents fewer sunspots and explosions such as flares and coronal mass expulsions or CME. But on waking, those signs of increasing magnetic activity become more common and more energetic.

On November 29, Parker observed the most powerful flare he had seen in three years, followed by a CME that launched the spacecraft at 1,400 kilometers per second.

“We have a lot of data on that,” Raouafi says. More CMEs should pass from Parker when it is even closer to the sun, which will inform scientists about how these explosions are launched.

Solar Orbiter also surprised. On April 19, a CME passed the spacecraft about 20 hours before its effects reached Earth. With existing spacecraft, observers on Earth receive only about 40 minutes of warning before a CME arrives. 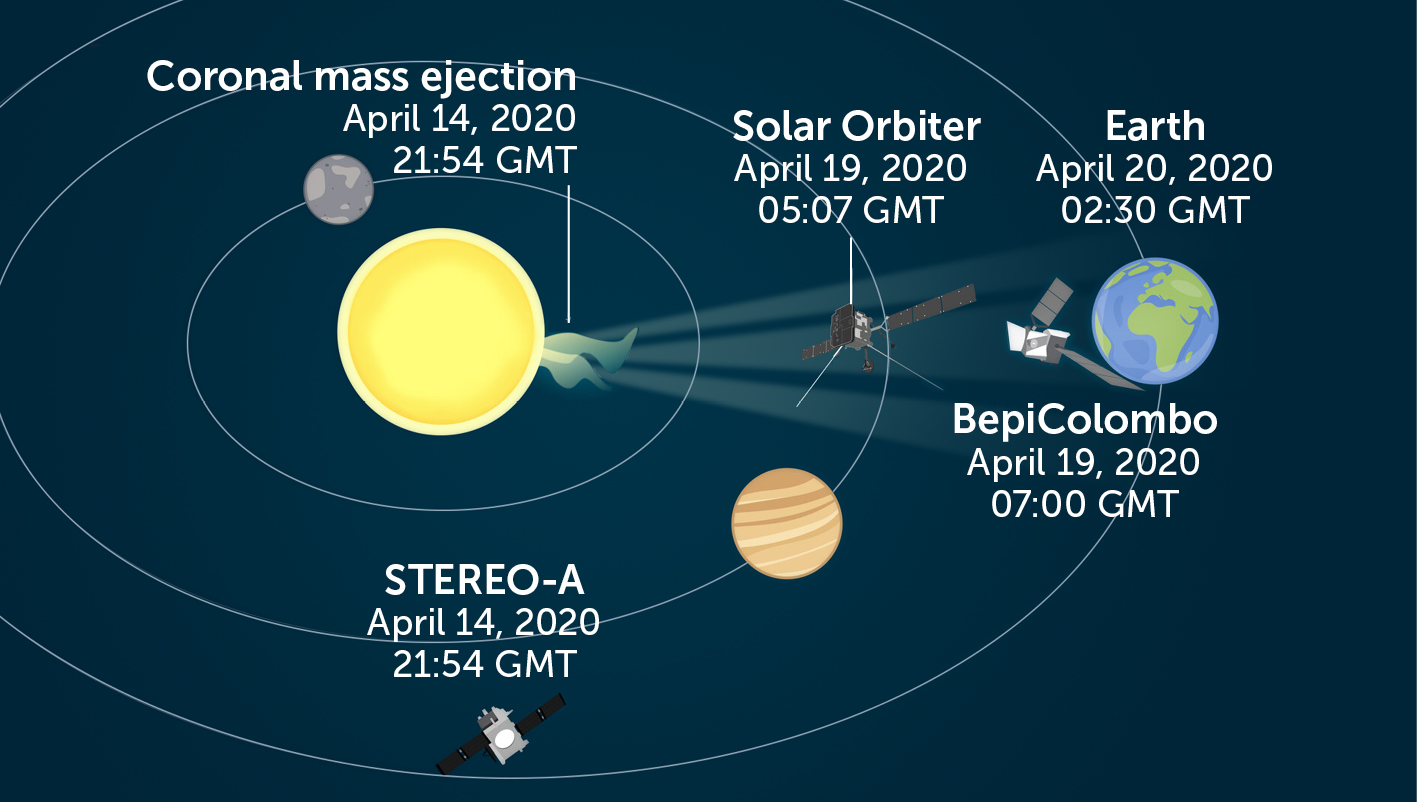 Solar Orbiter detected a large plasma explosion called coronal mass ejection in April, almost a day before the signs of the eruption reached Earth. Observers on Earth typically receive only 40 minutes of warning before such an eruption arrives.THAT 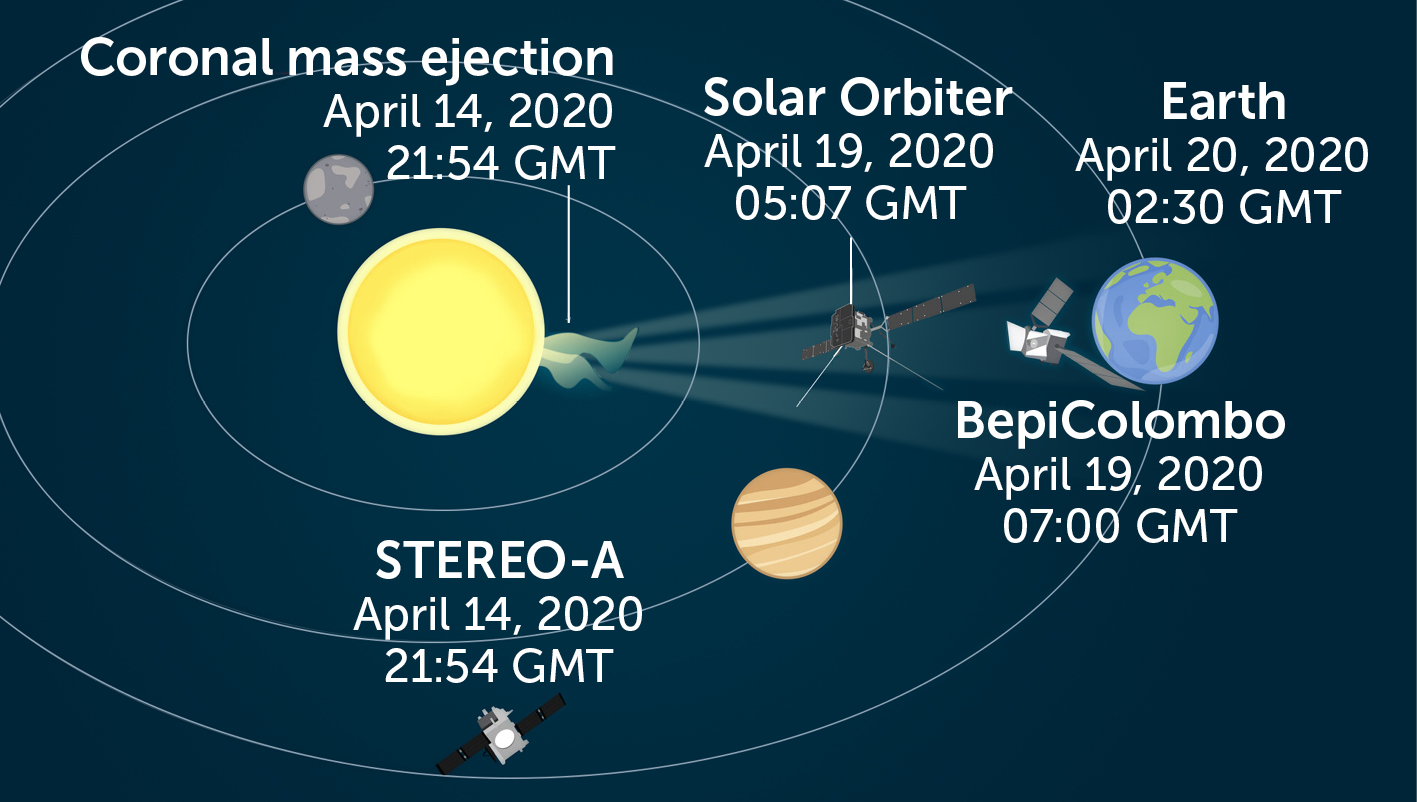 Solar Orbiter detected a large plasma explosion called coronal mass ejection in April, almost a day before the signs of the eruption reached Earth. Observers on Earth typically receive only 40 minutes of warning before such an eruption arrives.THAT

“We can see how that CME evolves as it moves away from the sun in a way we’ve never been able to do before,” Horbury said.

Strong CMEs can eliminate satellites and power grids, so it’s important to have as much warning as possible. A future spacecraft at a distance from the Solar Orbiter from the sun could help give that warning.

This orbit is the first time Parker Solar Probe and Solar Orbiter will observe the sun in tandem, but not the last. “There will be a lot of opportunities like this,” Raouafi says.

You are looking forward to one opportunity in particular: the 2024 solar eclipse. On April 8, 2024, a total eclipse will traverse North America from Mexico to Newfoundland. Solar scientists plan to make observations from all the way from the whole, similar to how they saw the total eclipse of 2017.

During the eclipse, the Parker solar probe will be in its second closest orbit, between 7 and 8 million kilometers from the sun. Parker and Solar Orbiter will be "almost on top of each other," Raouafi says: both spacecraft will be together on one side of the sun as seen from Earth. Any prominence and other forms of the crown that are visible to Earth observers will be directed right at the spacecraft.

“They will be flying through the structure we will see from Earth during the solar eclipse,” Raouafi says. The combined observations will indicate to scientists how the characteristics of the sun evolve over time.

“I think it’s a new era,” Horbury said. "The next few years are going to be a change in the way we see the sun."