As you search for answers to scientific questions, it is sometimes worth taking a step back to appreciate the exquisiteness of the world.

For developmental biologists Daniel Castranova, Bakary Samasa and Brant Weinstein, part of that delicate beauty is inside a zebrafish. While working in Weinstein’s lab at the Bethesda National Institutes of Health, Maryland, Castranova and Samasa took an impressive photograph of a new zebrafish, illuminating parts of its lymphatic system never before seen.

The photo comes from research that tried to determine if the zebrafish has lymph vessels inside their skull. The lymphatic system helps remove toxins and waste from the body, and previously researchers thought only mammals had these structures close to the brain.

But zebrafish also have those vessels, Castranova and colleagues report in a preliminary research published in May at bioRxiv.org. The team used fish that were genetically modified to have lymph vessels that fluoresce the orange under certain conditions, with skeletons and scales that glow blue. Because Castranova says fish are easier to raise and create images in the lab, the discovery could help scientists more easily study the role of the brain's lymphatic system in neurological diseases such as brain cancer or Alzheimer's.

After taking the photo — a compound of 350 images taken with a confocal microscope — on a hectic workday, “I didn’t even look at the photo for a couple of weeks,” Castranova says. "And then when I looked at it at some point after the data processing, it was like, 'Go.'"

Although it cost Castranova a little to appreciate what he had on hand, the judges of the 2020 Nikon Small World photomicroscopy contest realized he was a winner. The photo won first place in the 46th annual contest. The results were announced on October 13th.

Here are some of our favorite photos from this year’s contest.

Inside a clown fish egg

A developing clownfish embryo (Amphiprion percula) won second place in the competition. The series of photos documents the growth of the embryo (from left to right) on the first day, morning and night of day three, day five and day nine.Daniel Knop / Natur und Tier-Verlag NTV

For nine days, German photographer Daniel Knop watched as an embryo grew from an amazing sack of golden yolk to a clownfish (Amphiprion percula) to produce this second winning photo.

The composite image, created by stacking several photos that had been taken while the embryo was in motion, documents the stages of embryo development from left to right. The first egg shows the newly grown fish hours after fertilization, with a white cluster of extra sperm still on the outside of the egg. The posterior embryos represent the fish twice on the third day of development (morning and evening), as well as on the fifth and ninth day, hours before the fish hatched.

Tongue of a snail 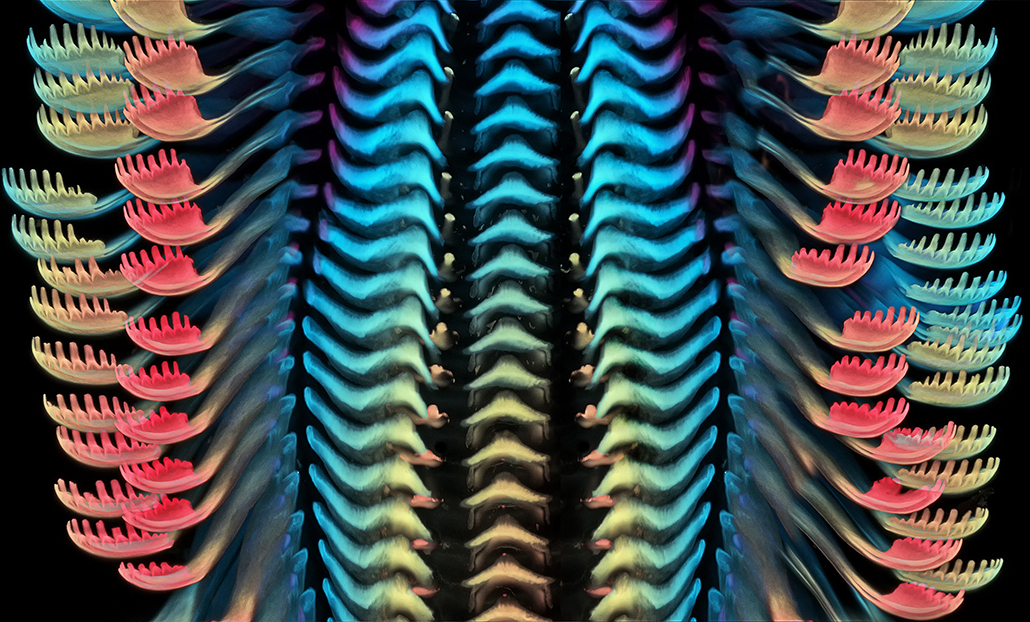 This colorful representation of part of the tongue of a snail, with an increase of 40 times, shows its structure in three dimensions. The blue sections are further away from the viewer and the hot pink ones are the closest. The image came third in the competition.Igor Siwanowicz / HHMI

When the aquarium of neurobiologist Igor Siwanowicz’s lab mate was taken by freshwater snails, Siwanowicz decided to take a photo of a part of a snail’s tongue, earning him third place in the competition.

The appendix, magnified 40 times, was photographed in layers with a laser to reconstruct the tongue in three dimensions. The pieces closest to the viewer are warm pink; the farthest pieces are blue. Tongue-like projections tear algae from surfaces to feed them.

“I chose this image to show that in nature beauty can be found in the most unexpected places, like the mouth of a snail,” says Siwanowicz, of the Janelia research campus at the Howard Hughes Medical Institute in Ashburn, Virginia, and second winner. in the 2019 contest (SN: 21/10/19).

Hair grown in the laboratory

Neuroscientist Karl Koehler and biochemist Jiyoon Lee, both of Boston Children's Hospital and Harvard Medical School, captured this image of human hair follicles that emerged in a cluster of laboratory-grown skin cells, commonly called organoids, on a plate. laboratory. There are other types of organoids for various parts of the body, such as the intestine and brain.

A skin organoid takes about four to five months to grow in the lab. Structures develop nerves that connect specialized cells in hair follicles, as does the neural circuit system that allows us to feel touch, and could one day help develop better skin grafts. This lab-grown skin develops from the inside out, Koehler says. Thus, the surface that makes the hair grow is within the cell cluster and viewers see the base of the hair follicles. The team published its findings on June 3 in Nature. 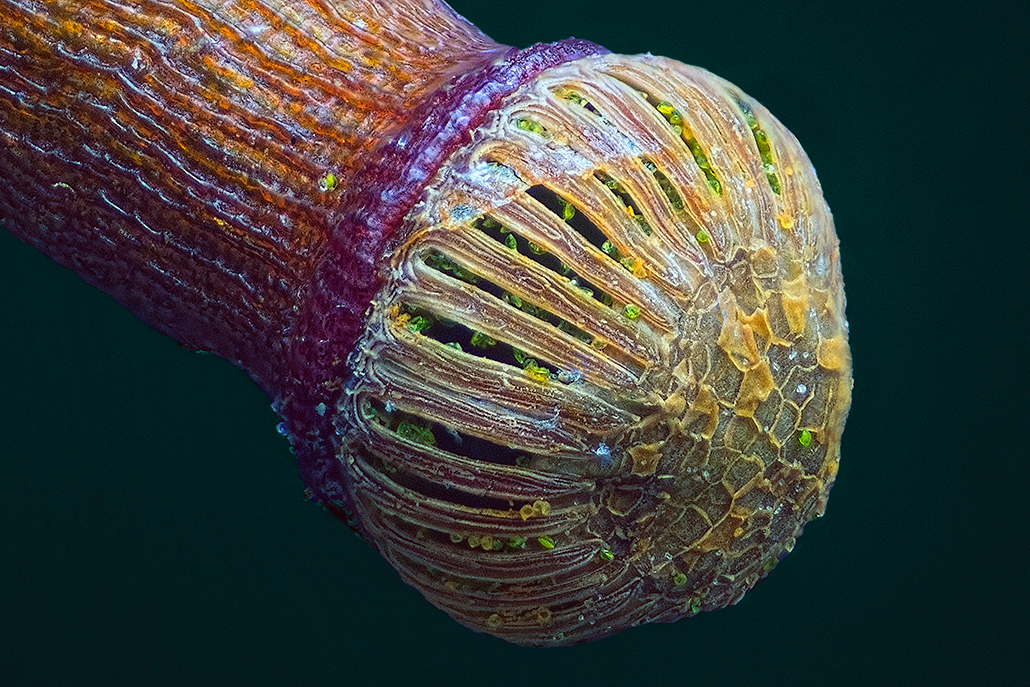 Moss capsules, like the one shown here with 10 times magnification and shown in false color, release hundreds of thousands of spores that the wind takes to new parts of the forest to grow. The photo is a distinguishing image in this year’s Nikon Small World photo contest.Miroslav Žít

Miroslav Žít, an amateur photographer from Prachatice in the Czech Republic, took this photo of an impressive moss capsule full of spores almost ready to fly. Capsules perched on stems extending from moss blankets.

Spores ride in the wind once released, sometimes traveling long distances and staying asleep until conditions are right for growth.

This mouse paw has been infected with the Chikungunya virus (pink on the bottom of the paw), a pathogen that causes painful inflammation of the joints. The rodent’s immune response to the virus, in the form of immune cells called microphages, is shown in blue and the overall tissue is orange. The image earned an honorable mention.Jonard Corpuz Valdoz, Pam Van Ry and Richard Robison / Brigham Young Univ.

Researchers at Brigham Young University in Provo, Utah, combined more than 2,200 photos taken with a confocal microscope to create this vivid shot of a 1-inch-long mouse paw infected with the Chikungunya virus.

Chikungunya is a disease that can cause debilitating joint pain. Biochemists Jonard Corpuz Valdoz and Pam Van Ry teamed up with microbiologist Richard Robison to see how a mouse responds to infection, hoping to shed light on how the virus spreads in animals, including humans. The image shows that immune cells called macrophages ran to their feet to fight the virus.

This image of the embryo of a short-tailed Seba fruit bat (Carollia perspicillata) is colored to show its skeleton in green and cartilage in orange; was ranked 20th in the photo competition.Dorit Hockman / Univ. of Cape Town, Vanessa Chong-Morrison / UCL

While attending an embryology course at the Marine Biology Laboratory in Woods Hole, Massachusetts, Vanessa Chong-Morrison, a developmental biologist at Oxford University, prepared this image of the embryo of a short-tailed fruit of Seba (Carollia perspicillata) for image day. .

Chong-Morrison, now at University College London, and Dorit Hockman of the University of Cape Town in South Africa took snapshots of the developing bat skeleton, capturing small areas at once. Hockman is also a developmental biologist who studies how bats' hands grow into "impressive wings." The couple put the images together to produce the final photo, which was edited to show the bat’s bones in green and the cartilage in orange.

A work of amino acid art 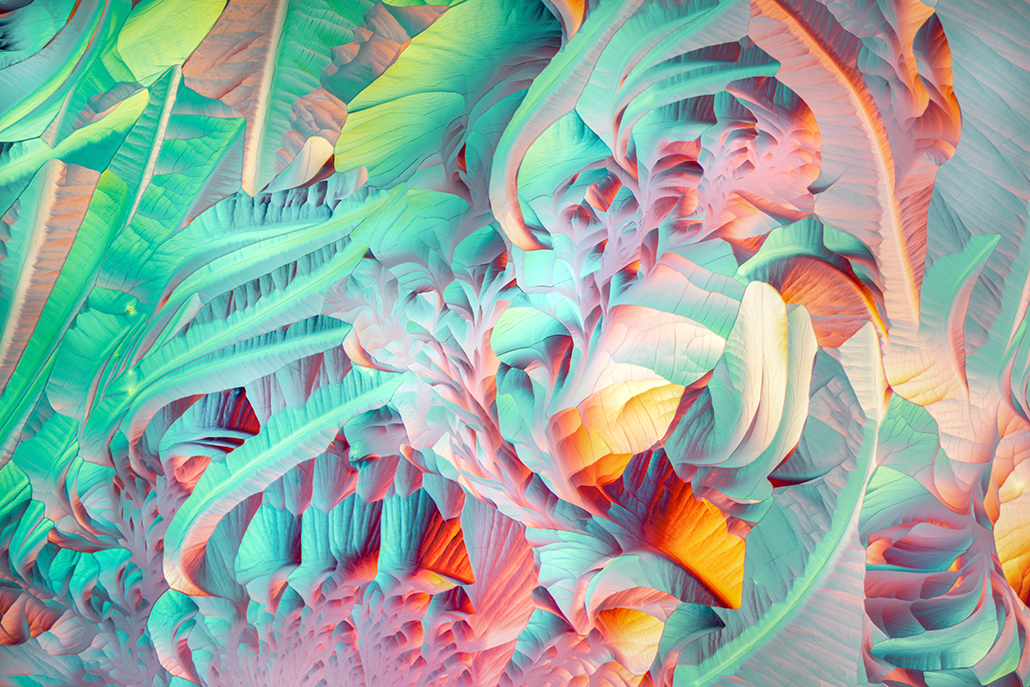 When found in a warm solution of ethanol and water, the amino acids L-glutamine and beta-alanine form crystals, photographed here in a 13th place winning photo with four times magnification.Photograph by Justin Zoll / Justin Zoll

No, this photo is not an abstract painting. It is a portrait of the crystals that form after two amino acids – L-glutamine and beta-alanine – are heated in a solution made of ethanol and water. One of the compounds, L-glutamine, is a key element for proteins and ensures that the immune system can function. The other, beta-alanine, helps with muscular endurance.

Justin Zoll, a photographer based in Ithaca, N.Y., fused several images of crystals taken four times their normal size into a panorama to show the intricate details of the crystals in a wider field of view. When crystals interact with various beams of polarized light, the arrangement of their molecules reflects stunning colors, he says.