Monkeys may share a key grammar-related skill with humans

An aptitude for mentally stringing together related items, often cited as a hallmark of human language, may have deep roots in primate evolution, a new study suggests.

In lab experiments, monkeys demonstrated an ability akin to embedding phrases within other phrases, scientists report June 26 in Science Advances. Many linguists regard this skill, known as recursion, as fundamental to grammar (SN: 12/4/05) and thus peculiar to people.

But “this work shows that the capacity to represent recursive sequences is present in an animal that will never learn language,” says Stephen Ferrigno, a Harvard University psychologist.

Recursion allows one to elaborate a sentence such as “This pandemic is awful” into “This pandemic, which has put so many people  out of work, is awful, not to mention a health risk.”

Headlines and summaries of the latest Science News articles, delivered to your inbox

Ferrigno and colleagues tested recursion in both monkeys and humans. Ten U.S. adults recognized recursive symbol sequences on a nonverbal task and quickly applied that knowledge to novel sequences of items. To a lesser but still substantial extent, so did 50 U.S. preschoolers and 37 adult Tsimane’ villagers from Bolivia, who had no schooling in math or reading.

Those results imply that an ability to grasp recursion must emerge early in life and doesn’t require formal education.

Three rhesus monkeys lacked humans’ ease on the task. But after receiving extra training, two of those monkeys displayed recursive learning, Ferrigno’s group says. One of the two animals ended up, on average, more likely to form novel recursive sequences than about three-quarters of the preschoolers and roughly half of the Bolivian villagers. 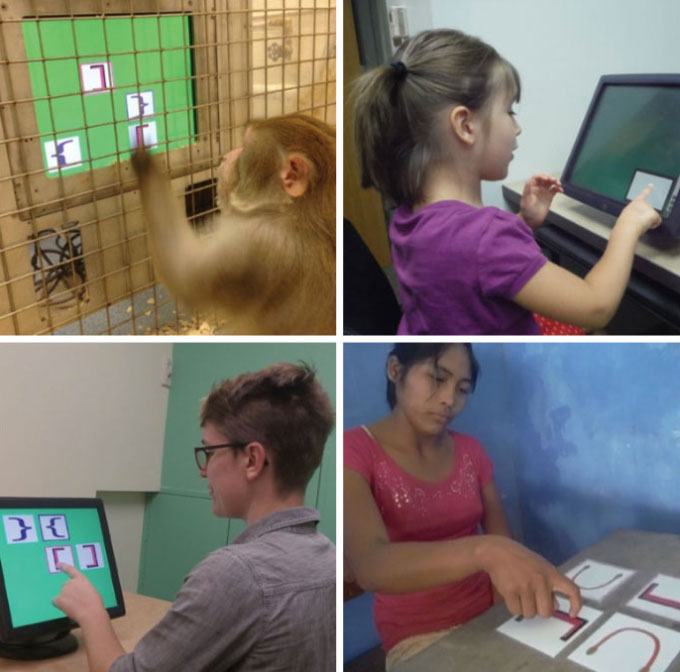 In a test of recursion, monkeys, U.S. children and adults and Bolivian villagers were trained to arrange symbols on a computer screen or on cards in a particular order and were then shown new sets of symbols. Humans and monkeys alike were successful, suggesting that a basic sequencing ability involved in grammar arose in primates long ago.S. Ferrigno/Harvard Univ.

Monkeys’ greater difficulty learning recursive sequences, relative to people, fits a scenario in which “this ability is evolutionarily ancient and could have been a precursor to the development of human grammar,” Ferrigno says.

Unlike earlier studies of monkeys and birds in which it was difficult to establish that sequence learning required recursive insights (SN: 4/26/06), Ferrigno says the new study probed for a type of recursive knowledge that enables one to understand a sentence such as “The cat the dog chased ran.” Each of the first two phrases, “the cat” and “the dog,” must be appropriately matched to the last two phrases, “chased” and “ran.” The middle two phrases go together, as do those on the ends.

Study participants were trained to arrange two sets of symbols in recursive patterns. Each training set consisted of four brackets — say, { } ( ) — with each bracket shown at random spots on a computer screen or on cards placed on a table. The goal was to learn to touch the four brackets in a recursive sequence with pairs of related forms in the center and on the ends, such as { () }. Chimes for humans and food rewards for monkeys indicated when an individual had touched a recursive sequence.

The researchers then tested whether humans and monkeys, without further training, would arrange new bracket sets, such as ()(), in a recursive pattern, say, ( () ).

Scientists familiar with the study find it fascinating but remain unconvinced that participants needed to understand recursion to learn the bracket sequences.

Unlike recursive phrases in languages, which are meaningfully related to each other, pairs of inner and outer brackets in the task are arbitrary symbols, say cognitive scientists Claudia Männel and Emiliano Zaccarella, both of the Max Planck Institute for Human Cognitive and Brain Sciences in Leipzig, Germany. Participants might have correctly sequenced novel brackets without thinking about recursion, Männel and Zaccarella suggest. Perhaps subjects arranged items in a symmetric, visually pleasing way consistent with what they remembered from earlier trials.

Or participants might have chosen new bracket sequences based on the remembered order of learned sequences, says cognitive scientist Stanislas Dehaene of Collège de France in Paris. Say a trained sequence was remembered as “first came {, then (, then ) and finally }.” Facing a novel sequence, say ( ) ( ), an individual would pick a bracket for the first position based on the closest item to that position recalled from training, in this case (. The learned order would dictate choosing the different pair, (), for the middle positions, leaving ) for the final position.

Monkeys, which generally can’t mentally keep track of as many pieces of information as people can, would struggle more than people to recall bracket orders, consistent with the animals’ poorer performance on the task, Dehaene argues.